Once again, the Government is having a crack at residential landlords. New rules effective from 1 April prevent tax deductions for rental losses. We've had similar rules in the past introduced by the Muldoon government and then reversed by the subsequent Labour government led by David Lange. It appears that the current government is intent on discouraging residential property investment, which seems strange given the acknowledged shortage of rental stock.

Prior to 1 April 2019, residential landlords have been able to offset losses arising from rental properties against their other income. Typically, such losses will arise due to the interest payable on loans taken out to purchase the rental properties. Where the interest expense and other property related expenses exceed the rental income, the position is referred to as negative gearing. As property prices increase the amount borrowed and therefore interest costs tend to increase. There can also be other causes such as costs to repair property damage by tenants.

Fred has worked hard for many years as an office manager receiving a salary of $120,000. His tax bill prior to any rental income/loss is $30,520 leaving him with $89,480 in his hand. Over many years he paid down the mortgage over his own home and saved up $50,000. By taking out a new mortgage on his home for $150,000 and then borrowing a further $600,000, he buys a rental property for $800,000. He is paying $37,500 a year in interest costs. He receives $1,000 per week from the rental property and after paying rates, insurance, repairs, property management fees, interest on the loan there is an annual loss of $5,000. He believes that in time as he pays off the mortgage and rents increase, the property will produce a positive return to help him through his retirement years.

Unfortunately, he has discovered that a tenant was operating a meth lab on his property. It will cost $50,000 to decontaminate and he will not be able to rent the property for 3 months. His loss for this year jumps to $70,000. It is a challenge for him to fund the loss but at least under the old rules it is offset against his salary reducing his tax bill to $8,020. His net cash position under the old rules would be $41,980 as below: 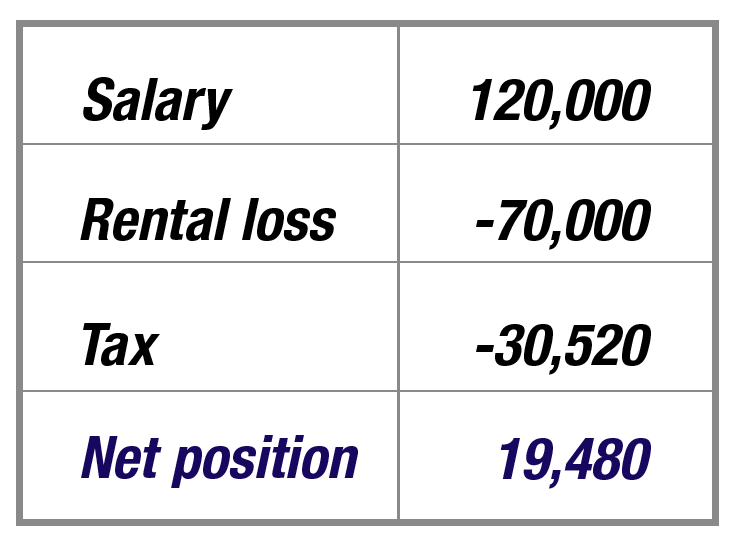 From 1 April 2019, landlords will not be able to offset residential property losses against their other income. Instead the loss must be carried forward and offset against future rental income or any taxable profit on sale of the property. Looking at Fred’s example above he will now be in the following position: 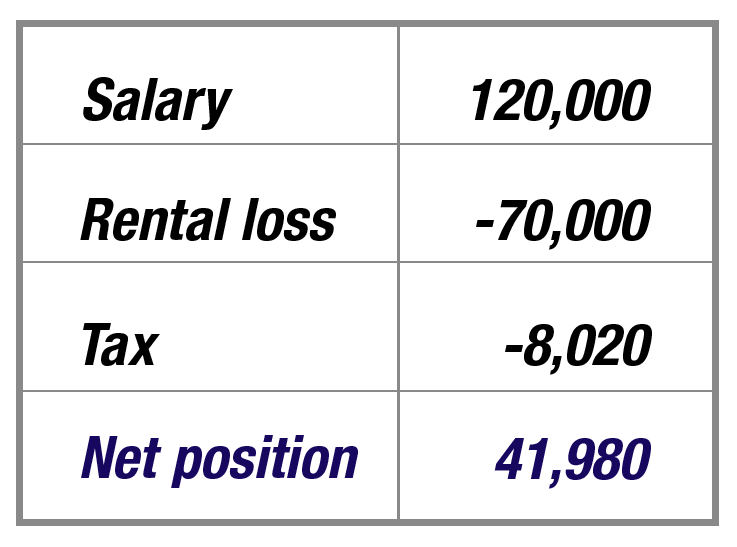 Fred is now struggling as he has around $430 per week less available under the new rules.


The new rules can have a retrospective effect as many landlords will be locked into loan commitments that were taken out in reliance on long established tax rules. It is unfair to change the rules and slam genuine landlords who may find it difficult to bear the increased cost of funding the rental loss.

The changes are justified by the Government referring to speculators and the untaxed capital gains that have been made on residential properties. However, speculators have already been dealt to with the 5 year brightline rules which tax investors who sell residential property within 5 years of purchase. Other changes in recent years such as removal of most depreciation deductions and changes to deposit requirements have significantly reduced the incidence of rental losses. There also appears to be a case of trying to shut the stable door after the horse has bolted. The large increase in residential property prices seen in prior years seems a thing of the past for now. Consider Fred now:


Fred wishes to sell the property but due to tightening of credit, loss of business confidence, restrictions on foreign investment and other landlords hurt by the new rules trying to cash out, property prices have slumped by 10%. After allowing for sale costs Fred would lose more than $100,000 if he sold now.


The changes are also purportedly justified by emphasising the tax saving as an advantage over other taxpayers, but that is misleading given that the losses are typically genuine cash losses. Losing $70,000 to save $22,500 is hardly getting an advantage over other taxpayers. Losses on other income earning activities are fully claimable so why should residential property be singled out as an exception?

It seems that the new rules are more of an envy tax and will affect many hard working New Zealanders who are trying to get ahead. As well as putting stress on genuine landlords, possible outcomes could be fewer rental properties available and increase in rents.